Okay, first I have to say, I have a love/hate relationship with carpools. They can be so helpful for us working moms who can not be everywhere at once. But they can also be pretty horrible. If you don’t like the people or kids or people don’t follow the carpool rules. This is not cool!

I have two boys, as you know, and both of them, especially the older one, are in a plethora of activities (Here is a post on using a flow chart to keep track of all your kids’ activities). My oldest is very into swimming. He swims all year around (the seasons just seem to collide into each other!), and as he has gotten older, he has had practice on more days. Right now he could have practice seven days a week (weekends are optional).

So a few years ago we were in a carpool with four other kids because I worked and my husband worked. There was no way I could take my son to swimming that many days a week. This is why we had our carpool, but it was terrible. Why was this? Because the kids and parents did not follow the carpool rules.

Now, we are in a carpool that is great. It only has three families in it. All the kids are very nice and polite. And the kids and parents all follow the carpool rules. Here are the rules that I think need to be followed.

Now this can go either way. There can be too little communication or too much communication. The car pool we were in years ago was all text messages, and that did not work. When I was at work, I told the person driving that I my son needed a ride, and then I was done. But, I would get about 10 texts after that from other parents saying their kid was not going or their kid was going. Then parents would say their kid was going, then 2 hours later, say their kid was not going because they had too much homework. So, even though I had already taken care of my son, and said he was going, I got all the extra texts. And when I am busy at work, I really don’t have time for that.

Then, when it was my turn to drive, I had to sift through all the texts to figure out who was coming. And then, my favorite, I would get to the house to pick up a kid, and they were not there. The parent had neglected to tell me their kid was not coming. I know people make mistakes and forget to text. But this just really annoyed me.

The carpool we have now has a google doc (which is what I recommend), and then each parent can put in when they will drive. And also, when their kid is not going to need a ride. It works pretty well because everyone has access to it, and can look at it everyday.

One thing to be on the lookout for though, is last minute google doc changes. I didn’t notice when one mom put that her kids were not going a couple hours before practice. So I went to pick them up, and they were not there. That was on me, because I did not check the google doc.

Rule #2 Your Own Kiddo Gets the Front Seat

Okay, so this is just for kids that are 12 or older, but the kids always fight over the front seat. In the last carpool I was in, one of the kids insisted he needed to sit in the front seat, no matter who was driving. Then he would change the radio station and yell at the other kids that they were being too loud. Nope, this is not cool at all.

The rule has to be your own kid sits in the front, passenger seat, no matter what. Even if they are the last one out of practice, which happens a lot with my son. All the parents and all the kids need to know this rule. And the carpool we are in now, they all know this rule. They all follow these carpool rules.

Rule #3 Give More Than You Get

What does that mean in regards to carpools? It means, be willing to drive more times than your kid is being picked up. Most people try really hard to keep carpools fair, but there is just no way to do it. Because what if you drive every Wednesday, but you don’t have to pick up as many kids because it is church night so not as many kids go? Does that count as your one day, while somebody else always drives on Thursday and has to pick up everyone? This is what I mean about it never being fair.

So you need to quit worrying about what is fair, and just do what you can to help everyone out. Because, in the end, that is the point of carpools. I usually work on Monday and Thursday so I am more than happy to drive carpool on my days off if my son gets picked up these two days. Just try to keep in mind, what you can really do for your carpool, instead of worrying about how Joey’s mom only drove one time last week and that is not fair. Don’t worry about it, if your kid got to his activities on the days and times you are working (Here is a post about feeling overwhelmed if you are feeling like that with carpool and other things.)

Rule #4 Carpool with Families Close By

I think this kind of goes without saying. But a carpool we used to be in had a kid that was halfway across town. The girl was very sweet, but she was so far away that my son had to be in the carpool for so long every night. Especially on the days that I drove. It just took forever to get the kids pick up and dropped off. Now, all the carpools we have are with kids close to us. This is the only way to go!

So, even though I am not sure if I like carpools or not. They work, if you find the right carpool, and everyone follows the carpool rules. 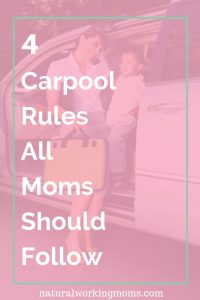 Vanessa is a Doctor of Pharmacy who champions natural health. She lives with her husband of 18 years as well as her 12 & 15 year old sons. She aspires to encourage moms on their journey to family wellness through holistic health and essential oils.
57 shares